1. To celebrate Oric’s 30th birthday, a contest has been organised starting from March 1st, 2013. This contest is open to all.

2. The purpose of the contest is to answer a questionnaire concerning the game "MURDER ON THE ATLANTIC"

3. To participate, you must return the completed questionnaire by e-mail to the following address:


accompanied by a slogan glorifying the Oric and a short novel

4.Each question will earn from 0 to a maximum of 5 points, depending on the information you provide in your answer.

As an example, the question: “Who Killed JFK?” could yield between 0 and 3 points.

Answer :
- Omer Simpson 0 point
- Lee Harvey Oswald 1 point
- It is suspected that several shooters may have been involved + 1 extra point
- We suspect a conspiracy involving CIA and the Mafia + 1 extra point

Only the members of the jury know the total number of points a given question can earn. The contest participants do not know this total and must give, to each question, as complete an answer as possible, in order to maximise their chances of victory.
Note: Accurate information, not included in the official responses list held by the jury, will not win any extra points.
5. At the end of the competition (December 31st, 2013), the name of the winner will be published by the Sponsors’ Websites (Defence-Force and OGC).

6. The winner will receive a disc micro controller “Microdisc” Oric

7. The honorary president of the jury is Bertrand Brocard. The jury is composed of: Doc. Mc COY, Denis Sol (Maximus), Mickael Pointier (Dbug) and Dominique Pessan (Dom). The jury is sovereign in its decisions, which are final.

8 - To settle possible ties, the jury will evaluate players's participation in the forum and their spirit of cooperation with other players. 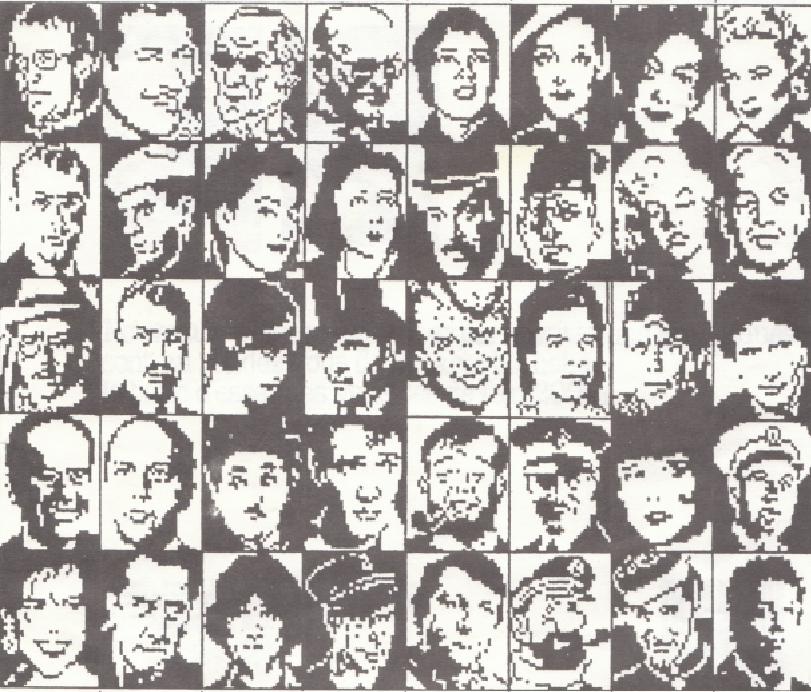 QUESTIONS FORMING THE MURDER ON THE ATLANTIC CONTEST
- Who wrote the threatening letter?
- How can you prove it?
- Who is "the brightest star"?
- What is the name of the president of the association whose whole board of directors went away with the cash for a transatlantic cruise?
- The letter signed by Birgit Neumann contains two improbabilities. What are they?
- What is the name of the machine which one can see on the micro-film?
- Give the listing of program whose flow diagram is provided.
- What is the meaning of the radio telegram?
- At what time did it arrive?
- To whom does the wallet that was found belong?
- What does the torn photograph represent?
- Has the gun in the picture been used?
- The gun is a Colt P38 special. What is the nickname of this weapon?
- Who killed the pilot "de la Vallière "?
- Where? And why?
- What proof have you got?
- At what time? How do you know this?
- What is the name of the second body?
- How did he die? And why?
- What could be found on him?
- Where is the scientist Turning?
- Why is he there?
- What can be found in the elevators?
- What happens every evening at midnight during the crossing?
- Where are the occupants who are away from their cabin?
- Who wrote the word found on the security guard of the hold?
- The whiskey smuggler was not well informed when he thought he would get rich selling alcohol in the USA. Why?
- What password allows you to search the entire boat?
- Who is the agent X13?
- When is the message "GEHEIM!" dated?
- In what country does Mr. Jacobson live?
- What caused Greta Von Baumann’s deafness? Are you sure?
- The position given on the SOS has something special about it. What?
- What does CQD mean in this SOS?
- Who are we talking about in the message in Morse code?
- What does the message written with invisible ink mean?
- One character is the father of one of the protagonists of “Meurtre à grande vitesse”. Which one?
- How far was the shot that went through the cloth (photograph) fired?
- What is the codeword which allows decryption of the message "GEHEIM!"?
- What does Herr Kempfer deal with in everyday life?
- The address of Ph. De la Vallière has something special about it. What?
- And his telephone number?
- What is wrong with the front elevator?
- What do the letters SS in front of the name of the French liners mean?
- What are the names of the creator and of the machine, whose plans can be found?
- What is the official commodity price of oats on April 11th, 1938?
- And finally, how old is the captain?

1/ To settle possible ties, each entrant must write a slogan glorifying the ORIC.
2/ In addition, the jury would appreciate reading a short novel (at least two pages) telling of this eventful cruise, in form of a tiny detective story. 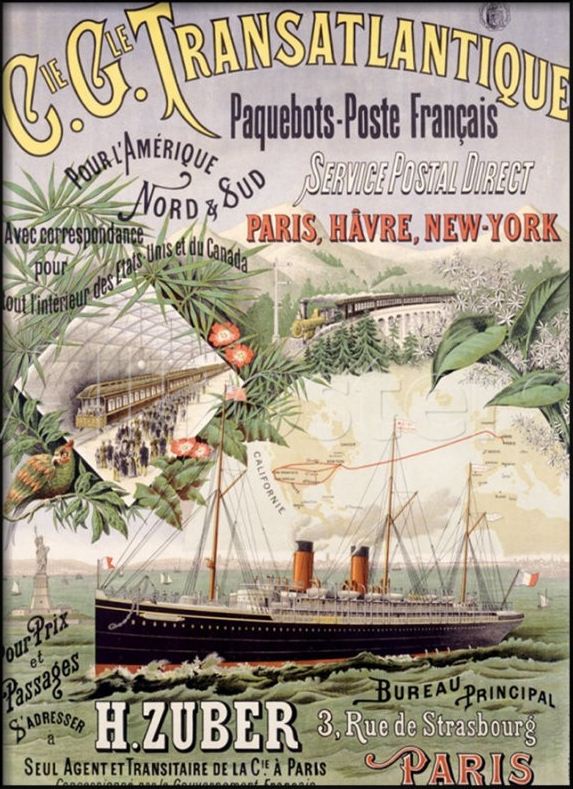 Tell us about the " Bourgogne "
The 30s were the golden age of ocean liners... German, English, American and French of course peacefully compete for speed, gigantic size... And luxury. The "Normandie" is launched in 1935, the largest and most beautiful ship had ever sailed by then. One would have thought that France had said its last word. Well it didn't! Two years later, he French Transport Company put into service the ship "Bourgogne". History forgot it... And yet this was a revolutionary ship in many ways.

In what way was it so special ?
First, in terms of design... What wasn't said at the time! Gossips insinuated that it was a copy of Normandy! It is true that one could find some resemblance in their shapes and the distribution of shared rooms: dining room, lounges, theater. But the Bourgogne had characteristics that no other ship could take advantage. It was the first to use a RADAR and was equipped with an extremely efficient anti roll system. Passenger comfort was further enhanced by special soundproofing of lower decks: hold, warehouses and above all, machines. At the time it was really a revolution. We must add to these technical innovations a new transmission system that allowed the Bourgogne to conquer the Blue Ribbon on its first Atlantic crossing. The system designed by engineers and Piau and Sirot was one of the best kept secrets of the Bourgogne.

Its commercial exploitation was also special. It must not be forgotten that the crisis of 29 is not very far... And that making such a ship profitable was astounding. It was often the State that filled the gap! This was not the case with the Bourgogne because of the commercial policy followed by its owner. It was decided that there would be only one class: Class Luxury.

On the other hand, a large part of the services on board; laundry, library, shops, photographers, etc. was granted to independent traders. In its first year of operation, the Bourgogne allowed CFDT to earn money!

What happened to "Bourgogne "?
Only two years after its commissioning, war broke out. The ship was then in New York. Without waiting for orders, the commander decided to shelter the ship in Guadeloupe. It remained there until the Armistice. Then, considering Vichy’s government attitude, and fearing that the ship fell into the Nazis' hands, commander Charvet placed the Bourgogne in service of the allies. The super liner commitment was one of the most secret operations of the war! The truth could be known only last year (1985) with the opening of British archives after 40 years of censorship ... (see the book by Pierre Charvet: "My father, commander of the Bourgogne." Ed Ulysses).
The Bourgogne sailed to an unknown destination, with volunteer crewmen. Never to be seen again... Churchill announced that it was sunk by a German submarine and Laval declared that it had been sunk by the British in addition to Mers-el-Kebir! In fact, it sailed to the north of Scotland. There, the interiors were largely dismantled and it was covered by a camouflage paint. Fake superstructures were added to completely change its shape... And it began its meteoric career of "ghost ship", carrying huge quantities of equipment. No warship could be its escort because of its speed, but precisely this and its radar made him virtually invulnerable...

Its last mission was the most tragic and the most original. Since Hitler had invaded the
Soviet Union, the Allies provided Stalin with a huge amount of equipment: tanks, ammunition, and fuel. These supplies were vital for the USSR not to collapse under the attacks of the Wehrmacht. The Germans were making every effort to prevent convoys from getting through: bombers, torpedo bombers, packs of submarines and a squadron of surface ships including heavy cruisers and the famous battleship Tirpitz... To make things worse, the convoys were also facing the terrible conditions of the Arctic Ocean. Each of these trips was epic!

At the end of 1943, to receive Stalin's payment, Bourgogne was sent to Murmansk. It
was loaded with an important gold cargo and left immediately towards Scapa-Flow at full speed. Its last message reached the Admiralty on December 3rd, 1943. Breaking silence radio, the operator of the Bourgogne sent the following message: " Having hit 2 floating mines – we are sinking fast ". The reception was then interrupted. Nowadays, the position of the ship is still unknown. The Bourgogne rests somewhere in Glacial Arctic Ocean, probably in the south of the island of Jan Mayen, the big dining room full of gold ingots…
Reembark it soon in your ORIC 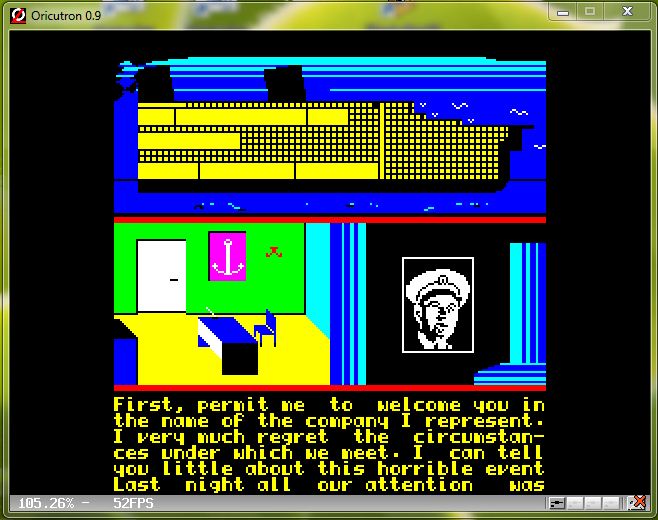 * First prize of the contest * 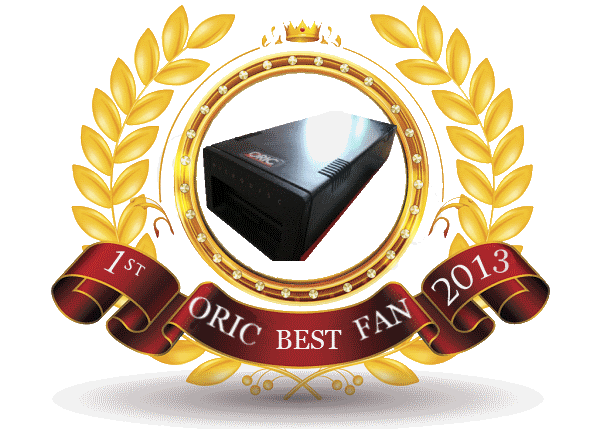 The Grand Prize of the Murder On The Atlantic contest for the Oric 30th Anniversary is... An Oric Microdisc system!

At this point in time we have not entirelly decided if there would be only one prize or if there would be also secondary prizes, but what is certain is that the grand winner will receive as a prize, a Microdisc unit and two 3.5" drives.

A typical Oric disk controller is able to control up to 4 drives and will accept 3", 3.5" and 5.25" drives without complaining.
Due to the difficulty in finding 3" floppies it has been very common for Oricians to add 3.5" floppy disc drives along their 3" Microdisc and set them up as bootable units.

Here, the 3.5" drives are configured as A and B drives while the 3" drive is only used to control the two other drives1

All the necessary cables to connect the 3.5" to the microdisc and the Microdisc to the Oric are provided, as well as a 250W power supply² .
This set has been sleeping in a box for at least 5 years but has been fully tested: We will be very happy to offer it to an Orician willing to use it!

This prize comes with a disclaimer: To be eligible to win this prize the winner will have to take the moral obligation not to resell this material on e-bay or other online auction site .

If the winner wishes to get rid of this Microdisc he will have to contact first Dominique Pessan3 (who would buy it back) and then possibly the Club Europe Oric.

These machines are made to be used by enthusiasts and not to languish on a shelf in a museum or in a collector's computers collection.

That's it for the teasing, the game is really worth the effort!

But, who the hell killed de la Vallière ?
1. The provided 3" drive is not reliable enough to be used as is.
2. Entirely "Sittler made", comes with a transparent case.
3. Who's giving away this drive as a prize and ported the game to the Oric